When I set this (the Filkcon Reports community) up I was expecting other people to post links to reports on their local conventions, but it ended up as just me hunting down and posting those links. This took a lot of time and effort (particularly for non-UK cons) and I got more and more behind with it.

Plus fewer reports were posted on LJ - they have mostly moved to Facebook and presumably to things like individual blogs, where I couldn't find them (I only got a FB account very recently, and of course I still might not see many of the reports).

I got so far behind that I ended up not bothering, and haven't posted anything here for a long time.

Would people still find this community useful? If it's to be revived it would need other people posting details of their local conventions. It would also help a lot if other people could join as co-maintainers - any volunteers?

Also, what's the best way to run it? At present it's still the first pass attempt that I set up years ago and never updated - is there a better way to enter and link the reports? And the community profile details badly need updating.

Perhaps it might be best (and much easier) for someone to post a single entry for each convention just giving basic con details, and all the report links to go as comments to that entry rather than edited into the entry as I've been doing. Thoughts?

Oh, by the way, for anyone who saw that facebook posting - since I seem to be the *only* person on the net with my name, I use various alternate names so it's not possible to trivially link up everything I've ever done anywhere on the net. The name I use on FB came from a random name generator. 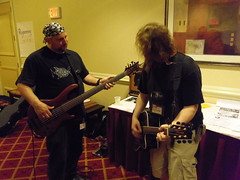 Rock on!
Originally uploaded by FilkerDave.
Pics from Concertino! In a typically lazy fashion, I haven't labeled most of them. There are also fewer than normal because my good camera is still out of commission, so I was working with the backup that I bought in York -- doesn't do nearly as good a job from my normal spot behind the soundboard!The full set of pictures is on Flickr. As usually, feel free to snag any pictures of you or your family members.

This entry was originally posted on my Dreamwidth journal. You may comment there or here.